With the huge array of shower trays that are currently available, we understand that picking the right one can be difficult. Clearly the shower tray has to be the correct size to fit snugly into the shower enclosure.  read more

Shaped to fit into the corner of your bathroom with one curved edge, Quadrant shower trays can be fully enclosed with the correct shower enclosure.

Ideal for walk in shower enclosures which will only have one shower wall. An ever popular shape of shower tray in a range of colours, sizes and manufacturing materials.

A square shower tray offers one of the easiest footprints to deal with and can be utilised in a small bathroom or Ensuite, still offering adequate sizing up to 1000mm x 1000mm 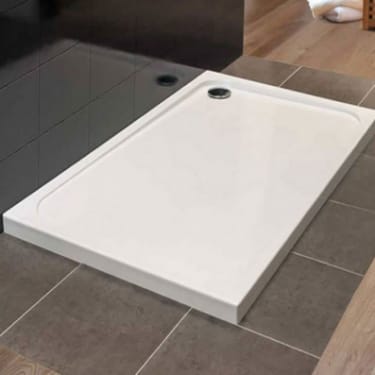 With the huge array of shower trays that are currently available, we understand that picking the right one can be difficult. Clearly the shower tray has to be the correct size to fit snugly into the shower enclosure.

Naturally, this alone will narrow the available options, but there are many other things apart from the shower tray sizes that might have to be taken into account.

It is worth remembering that although the principal reason for having a shower tray is to ensure that water is prevented from damaging the floor beneath it and causing damage to any ceiling or room below, they can also be an attractive feature.

Which material for the shower base will suit the enclosure the best, normally these shower trays are manufactured in either acrylic or acrylic tone capped resin, occasionally they can be of pure plastic.

What colour is going to suit the bathroom or shower room the best? Traditionally white has been the colour of choice, but this is no longer the “go-to colour” as may colour options can be chosen, although this may be subject to special order and short waiting time.

We have a large selection of shower trays available and our staff is eager to help you with your order or to ask a question about our products. For further information visit our FAQ section or email us at sales@bathroomplanet.com 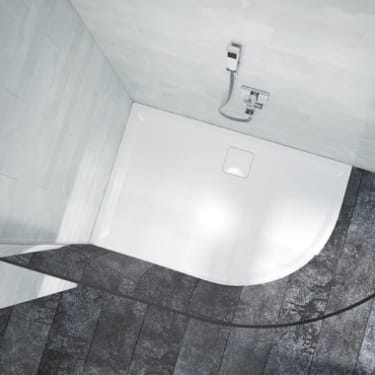 Firstly, we have Acrylic capped abs stone resin shower trays. This style of shower tray is known for being quite heavy and durable. They have the same finish as standard acrylic trays making the shower tray more scratch resistant.  Merlyn has a range of this style of trays called Touchstone.

Then we have solid stone resin shower trays. These shower trays have been becoming an increasingly popular choice given their durability and range of high-quality finishes. 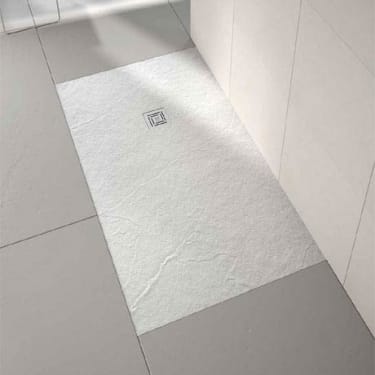 There are also different finishes available for shower trays with standard white, non-slip white trays and a slate effect. Many manufactures offer ranges with standard finishes without anti-slip, these trays can be a great addition to any bathroom with their sleek minimalist design suitable for both wet rooms and shower enclosures. Check out Merlyn’s Level 25 range of shower trays for more. The non-slip feature is a great safety feature and is most commonly found in Zamori shower trays or the Kudos Connect2 range. Another great feature of the Kudos Connect2 range is that it has 2 waste position options ensuring that you miss those wooden beams underneath that would force you to raise the tray.