Just like basins and baths, bathroom taps come in a wide variety of styles and designs, each with their own distinct advantages and aesthetics. While some taps are interchangeable, you’ll find that most are made to fit specific basins and baths due to their controls and how they’re mounted and installed. read more

Wall, floor and deck mounted bath taps, we have a vast range of styles colours and finishes available you can even get matching bath and basin taps 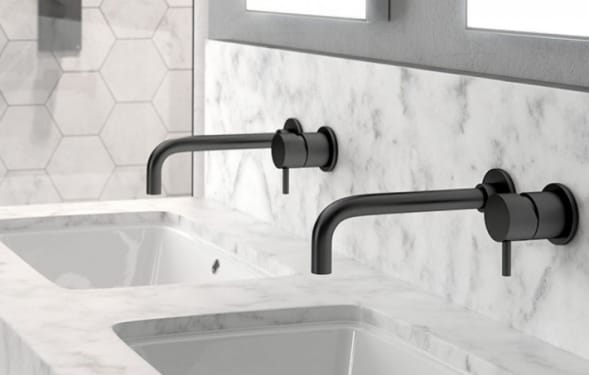 The type of tap you choose will largely depend on your basin or bath and available space. Generally speaking, basin taps can be distilled down to three different categories: 1, 2 and 3 tap hole variations.

Designed for basins with just one tap hole, monobloc taps feature a compact design that can be controlled with one or two levers. For single levers, turning to the left supplies hot water while turning to the right supplies cold water. This design means the water temperature can also be more finely adjusted depending on the lever’s positioning. Moving the lever close to or away from the spout can also adjust the water pressure. Double lever designs, on the other hand, are controlled by mixing hot and cold water with separate controls.

Basins with two tap holes can be equipped with pillar taps or bridge taps. While each of these 2-hole variations features individual hot and cold levers or knobs, they work in different ways: pillar taps have individual spouts and levers for each water temperature, whereas bridge taps have one spout joined with two temperature controls. Pillar taps are the most common variation in the UK and can be found in most basins.

Taps designed for basins with three holes function in the same way that bridge taps do but feature a more state-of-the-art design. While bridge taps have a traditional, ornate look, 3-hole basin taps are more refined, with two controls and an individual spout. Their minimalistic look is due, in large part, to the plumbing being hidden beneath the surface of the basin or in the wall. What does show is a simple design that looks clean and is easy to use.

Bath taps often feature some of the same design aspects as basin taps but they also feature designs and models that are specific to baths. Mono taps, pillar taps and 3-hole taps generally share the same characteristics regardless of which fixture they’re attached to but 4 and 5-hole taps, floor standing taps and wall-mounted taps are most commonly reserved for baths.

Like the 3-hole variation, 4 and 5-hole taps feature two controls for hot and cold water and an individual spout. What they also include is an additional spout for a handheld shower hose attachment and in some cases, another knob that diverts the water from the regular spout to the handheld one. This mixer style can also be used in shower baths where the shower attachment is mounted higher than the other spout and controls. 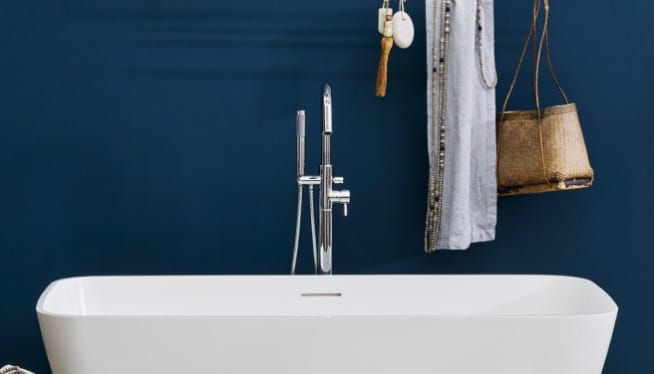 Generally used for freestanding baths, these taps are connected to the plumbing through the floor instead of the wall or the tub itself. This style allows for a freestanding bathtub to be more freely positioned around the bathroom and create a look that's the most different from all others.

Attached to the wall above the bathtub, wall-mounted taps can feature many of the same controls and spout styles found in other taps but save space by hiding the plumbing behind the wall. They’re also one of the cleanest looking styles around and, when combined with the right tub, can modernize almost any room thanks to their simple, flat design. 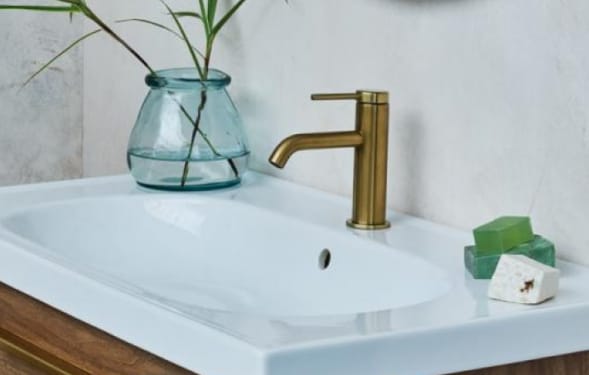 Beyond their specific installation requirements, you’ll find that basin taps come in several variations. Temperature and water pressure, for example, can be controlled by either levers or knobs and spouts are available in styles that can be swivelled or fixed. The choice of levers or knobs may come down to personal preference but swivel spouts, for instance, offer functionality that fixed ones don’t. In any case, when these small details are changed, they effectively change the taps themselves.

Additionally, spouts can be sized to fit your basin. Small taps have a compact design and shorter spouts to best fill small basins, while larger basins can be equipped with taller or longer spouts that come out from the wall further than others. Though not as common in basins as in baths, wall-mounted taps can also help create space in small bathrooms with smaller basins by hiding the plumbing behind the wall. This design allows for small tapless basins to align as closely to the wall as possible. Though it may not create a drastic difference, some small en-suites and cloakroom bathrooms will benefit from every inch they can get.

Basin tap styles also vary to compliment almost any decor. Modernistic taps, like the Crosswater MPRO Basin Monobloc, come in finishes such as chrome, stainless steel, nickel, brushed brass, matte black and more, giving homeowners the luxury of finding the perfect match for their bathroom. Similarly, smaller basins can benefit from the Mini version of the tap while still enjoying the same design, function and finishes without sacrificing personal taste.

Traditionally-styled bathrooms are spoiled for choice when it comes to tap models and finishes too. With the ability to add a touch of class to almost any basin, traditional taps draw from the best classic styles while still incorporating current functionality and technology. Unlike the matte finishes you might find in contemporary taps, models like the Burlington Chelsea Straight Monobloc Basin Mixer offer a polished chrome look complete with a white, black or medici accent. 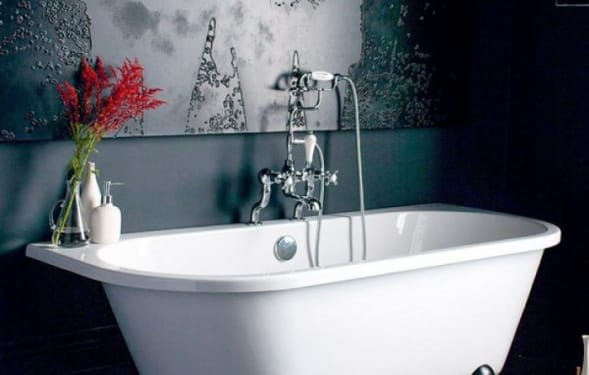 Baths come in all sorts of shapes and styles and, as you can probably guess, their taps are no different. Whether traditional or modern, you’ll also have a choice of design and finish that will highlight the finer details of your bathroom decor.

Even more so than with basin taps, bath taps offer a diverse range of styles that can not only change the look of your bathtub but also change its functionality and upgrade older existing hardware. For example, a standard rectangle bath can be transformed into a shower bath with the right tap. In this case, a 4 or 5-hole tap can add a shower handset and additional control to switch between it and the regular faucet. This can be mounted at tub level to use while bathing. Alternatively, a standard adjustable shower bath mixer can be mounted above to create a standup shower unit.

For those that need a little extra space, opting for a wall-mounted bath tap can also transform your bathroom and help to make every inch count. They feature some of the more modernly-styled designs for the distinct look of minimalism but you’ll also find some classic pieces too. The Burlington Kensington Wall Mounted Bath Filler, for example, can save space and looks great but features a more traditional, sophisticated look. The same design cues can also be found in many floor-standing taps. Designed for use with freestanding baths, they can be ultra-modern or classically traditional but can be installed without taking up wall space.

In some designs, you’ll even find a combination of several different types of taps. The Crosswater MPRO Free Standing Bath Shower Mixer, for example, takes the best parts of floor standing models and combines them with a shower bath tap to create a hybrid that looks fresh but can still be installed alongside more traditionally-styled baths.

For the average bathtub, there are also lots of opportunities to get creative with your tap style. On the right tub, a bath filler is discreet and simple but, like its name suggests, does just that: fills the bath. Deck mounted taps, on the other hand, are mounted on the bathtub and feature a design that is similar to the bridge tap for basins: two knobs joined together at a single spout to control water temperatures individually. 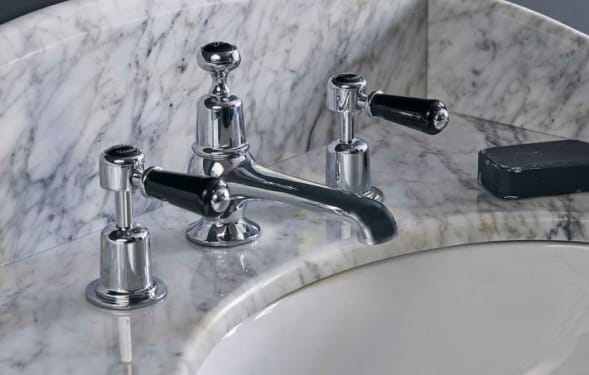 Taps are often categorized in different ways; you can group taps together by how they’re mounted and installed, how they function and operate and what styles they're available in. Distinguishing between some of these is easy but when it comes to style, what exactly is it that makes a tap modern or traditional?

For starters, finishes help characterize a tap and you’ll find that different styles will adopt certain finishes. Many ultra-modern bath and basin taps offer matte finishes or brushed looks that tend to look flat or monochromatic. Traditional taps, on the other hand, are available in glossy or highly-polished metal finishes that date back to the Victorian or Edwardian eras. They’ll also feature small accents that add a bit of flourish and detail to the hardware. You’ll find that taps of both styles may also feature indices and indicators to which control does what, like a letter H or C for hot or cold, respectively.

Waterfall taps are a distinctly current and on-trend look that you won’t find amongst traditional taps. They feature a spout that allows the water to flow and fall out unlike most other taps on the market that supply water in a seemingly more pressurized manner. At their best, waterfall taps are like having a water feature right in your bathroom.

Certain brands also focus on producing specific styles of taps for bathrooms and their most popular models would suggest there’s no one-size-fits-all tap solution. For instance, RAK's Washington collection caters to the traditional crowd and offers intricate bath and basin taps and more. Crosswater, on the other hand, is a brand that is focused on contemporary bathrooms and produces taps that test new ground and propels design forward. Both, however, produce high-quality taps fit for your bath or basin.